I  have wanted to take a look at the outdoor art in Walnut Creek for a long time. Hope I can find some of the less know sculptures to view and share. Am posting on FB Walnut Creek Feels Like Home also. Would love to have you ‘Like’ us there.

May 19 – Kinetic sculpture is hypnotic. The silent fluid movement that continuously changes the face of the piece is just wondrous to behold. Can you tell that I REALLY like this piece? Located at the front of the Ygnacio Center @ 2033 N. Main. Delightful Sculpture! This link is a short interview with the artist.  (The link sometimes does not work.)
http://www.searchlightfilms.org/Searchlight_Films/Kirk.html 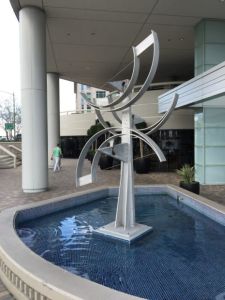 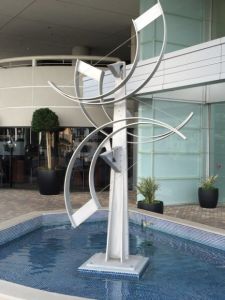 May 12 – I LOVE kinetic sculpture, but didn’t realize this one was moveable. In a world where most art has signs saying “Do Not Touch”, I didn’t. Tiltambulation, (1984) by Jerone Kirk, is a piece I will revisit, but just to nudge and hopefully watch gentle movement. This video shows others having a pretty active encounter. Can be found at 1600 Riviera Ave. https://www.youtube.com/watch?v=S_hElsiVyIw 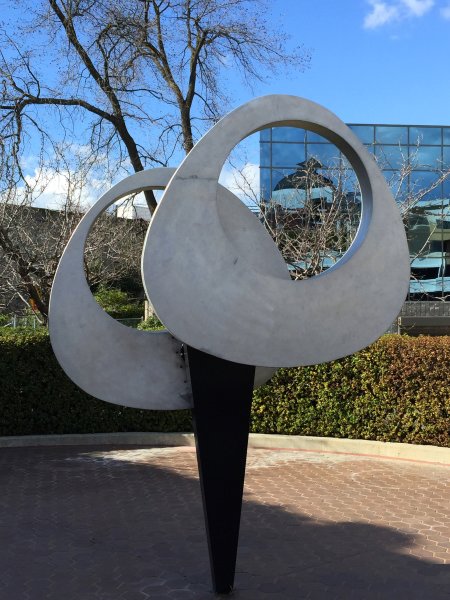 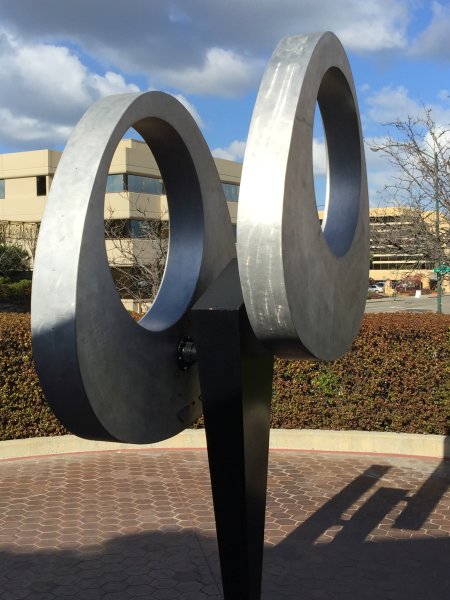 April 16 – I walked right by this ‘Untitled’ piece a couple of times before I spotted it running up the side of the building at 1670 Riviera Ave .  First thought was, “Maybe it looks better at night?”  Well, I finally went by last night to see how it looked and nothing was happening.  No neon light, and was disappointed. Neon is an interesting medium and it was a creative thought to have it running up the full height of the building.

Too bad it wasn’t lit. Bill is local, has been doing neon work since 1972 and has a studio in Crocket. Video interview of Bill Concannon. He was commissioned to do the Car Logo in neon for the Pixar movie. 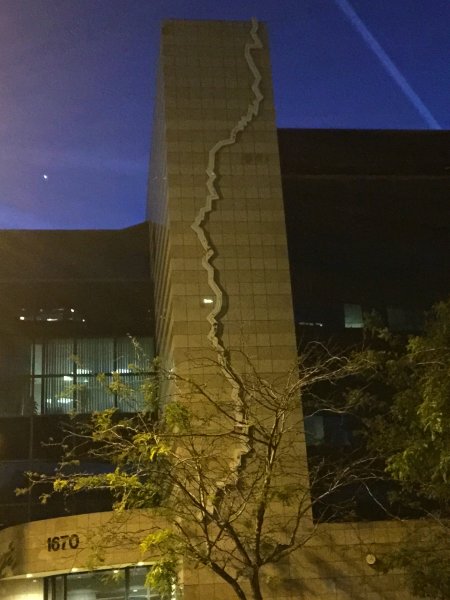 April 5 – This is a powerful piece. I was initially just awed by the upper level location of this secret plaza, with its view of Mt Diablo and the mirrored windows reflecting the clouds. I would LOVE to live in this spot, high above the street. I had never been to this upper level of the Mt Diablo Plaza, 1275 N. Calif. Blvd.

Jerry Peart has called it ‘Wicked Witch’ (1984) and I thought first of Darth Vader. There is an interesting interview on his website of him talking about the evolution of his art. Intrigued, I emailed, hoping that I could learn more about this particular piece.

Questions answered! 🙂 I heard back from  Jerry and he originally fabricated this piece in his studio in Chicago in 1982 and then transported it down to Maimi, FL where it was shown at the ConStruct Gallery. Tishman purchased it from there. Jerry himself transported it from Florida to Walnut Creek on his flatbed truck. This would give him a chance to see the country and to personally supervise the installation at its new home.

It is clearly different that his other pieces that are painted with intense and vivid colors  The more I look at it, the more I like it. I didn’t remember seeing the red strip along one edge, but spotted it on the artist’s site and, sure enough, it showed in one of my photos too.  Just distracted by the setting I guess.  Do yourself a favor and take the hike up lots of stairs to this wonderful location. The view and the art are well worth it. 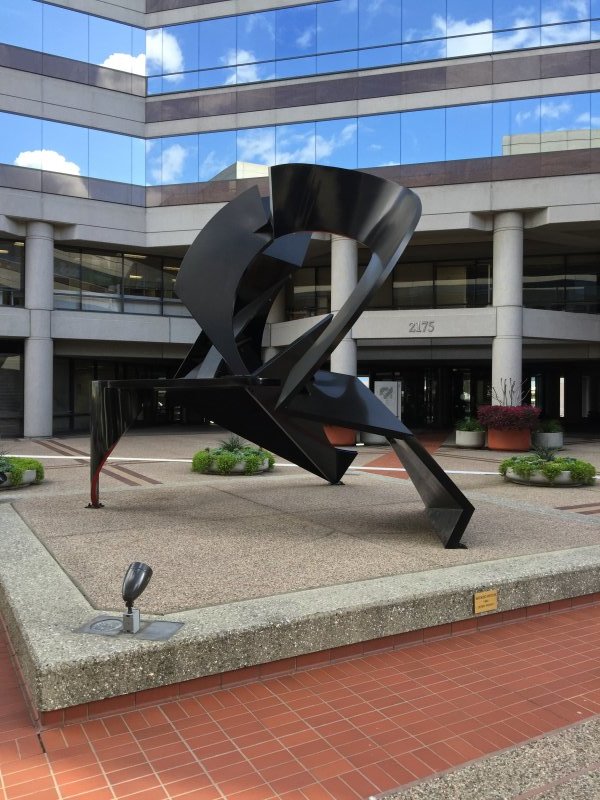 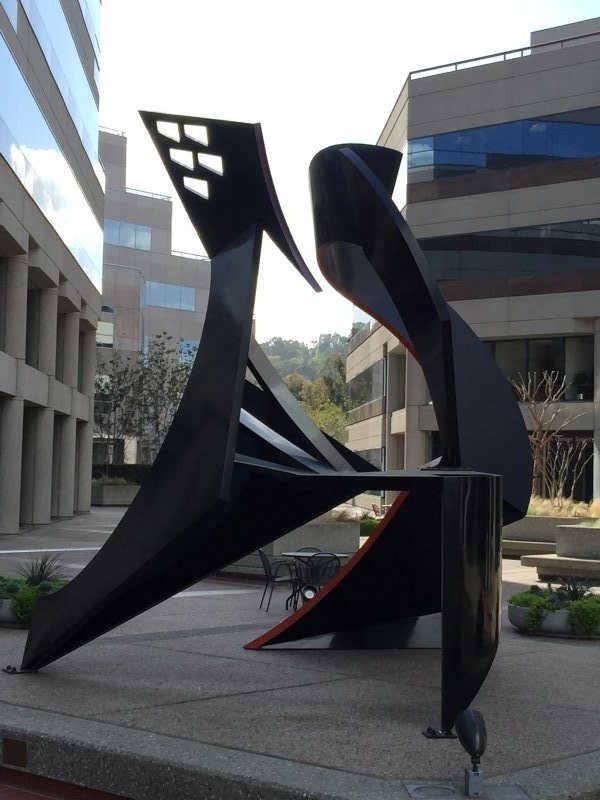 March 5 – Pick-Up-Sticks anyone? This is a cheerful piece and definitely off the beaten path. Colorfully painted steel and located at an upper level in the California Plaza @ 2121 N. Calif. Blvd. Although I see that WC has it listed as ‘Untitled’, Roslyn Mazzilli’s site calls it ‘Ascension’ (1986)

There is clearly flow, balance and energy in her work. Her bold sculptures are painted metal shapes that she says were inspired by nature and the use of nature’s colors. Truly is a sense of movement within them. 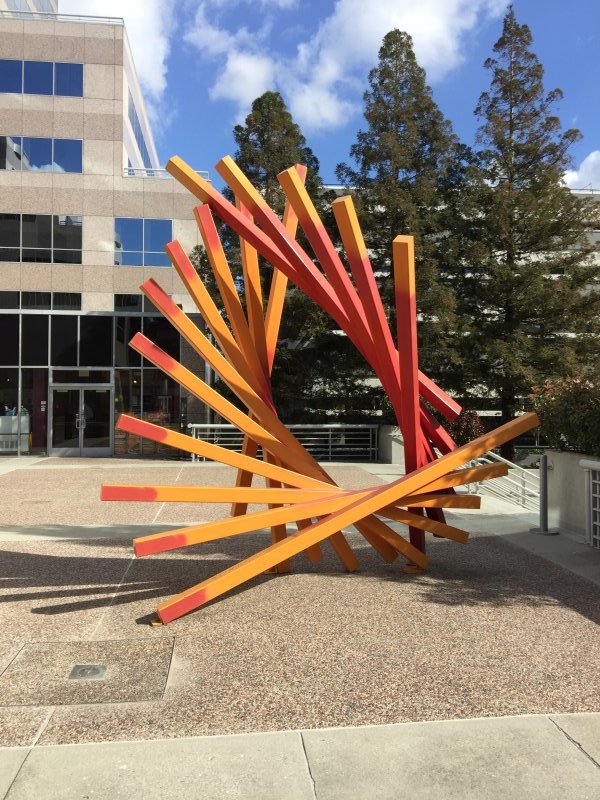 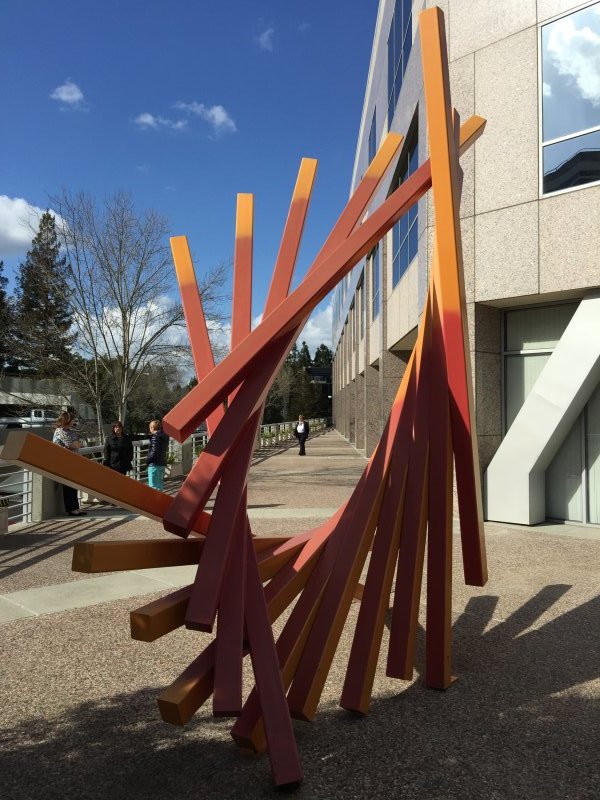 March 2 – There are a lot of interesting angles on this painted aluminum plate sculpture. It would have been interesting to watch it being delivered to this site. I do wonder what is under the aluminum because it is beginning to rust around the base.  “Folded Square Alphabet G” (1984) by Fletcher Benton. I like it from all sides and it is worth taking a look at this and some of the other works of art that I will post in the next couple of days. How wonderful to incorporate these pieces in office building plazas. It is located on 200 Pringle across from the WC BART station. 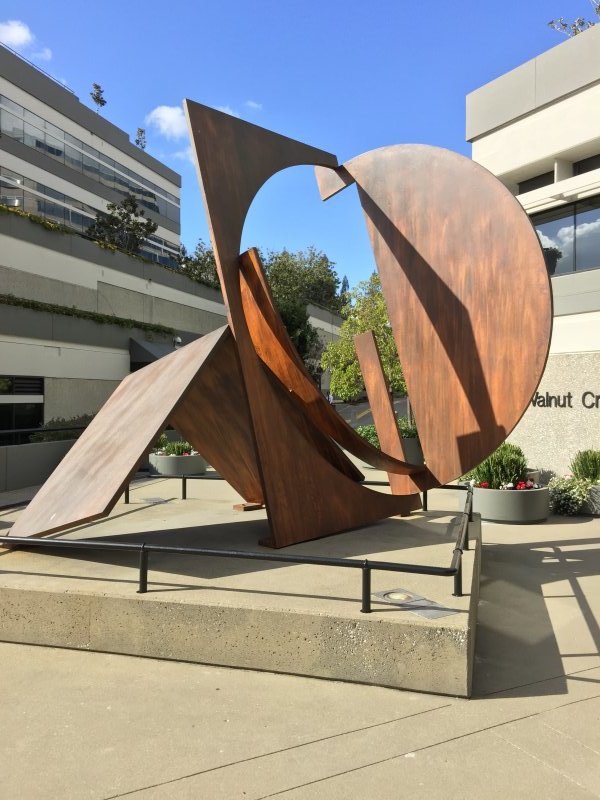 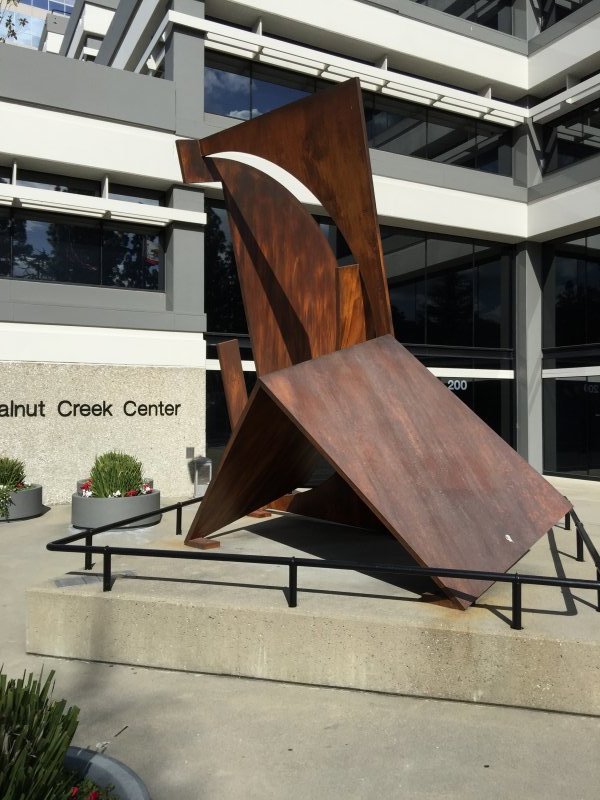 March 1 – My first of the series is of the tall sculpture outside of my office, and located in the center of Growers Square. Right across from the Lesher Center. For years I thought there were 2 tall, lean men standing with one holding a gun over his head. Completely wrong! “Transitions” (1985), by Allie Bill Skeltonis a larger than life bronze sculpture showing where we came from as an agricultural area and now a center of commerce. (my interpretation) Upon closer viewing, the ‘gun’ is a miniature skyscraper, appearing to grow out of an ear of corn. The other man is holding a plow and inside the gourd at their feet is a computer, books and technology. 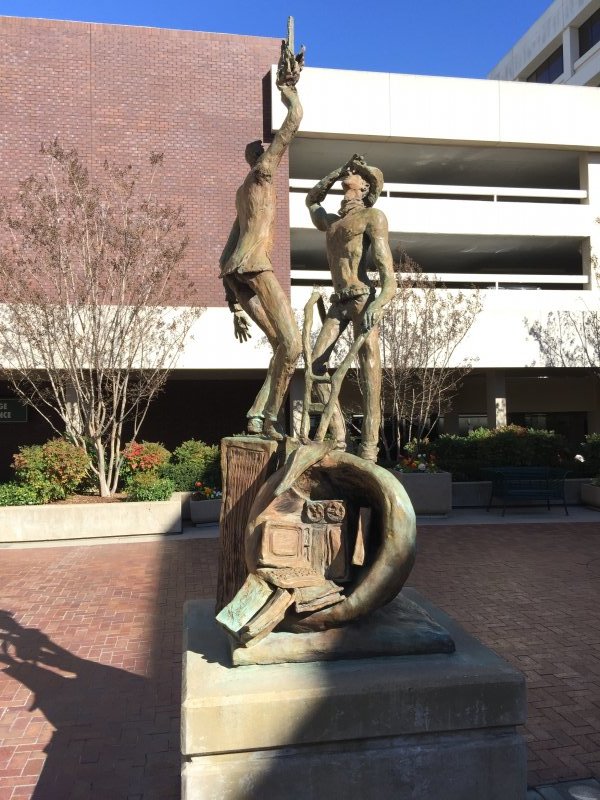 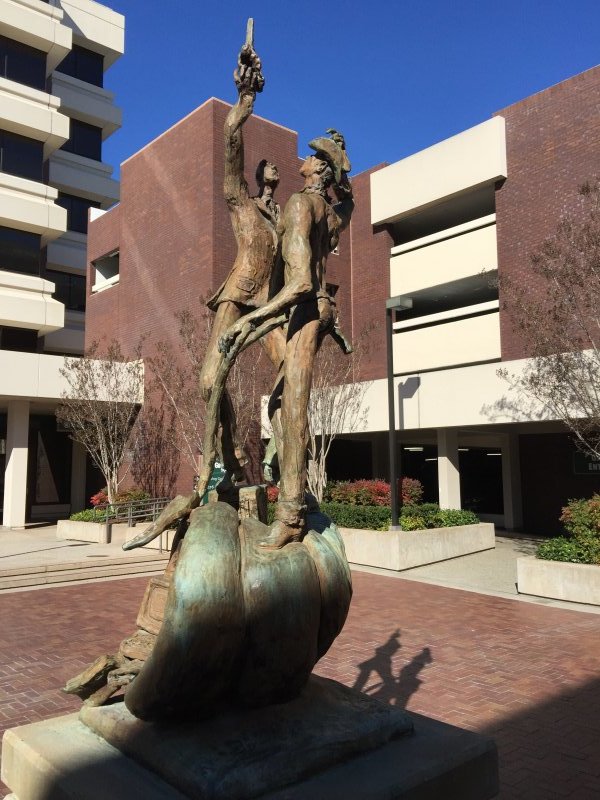